Welcome to Wickstrom studio's blog. You can follow this blog, and also our studio21south art gallery blog, to keep up with what's going on around here.

A Dog in Winter 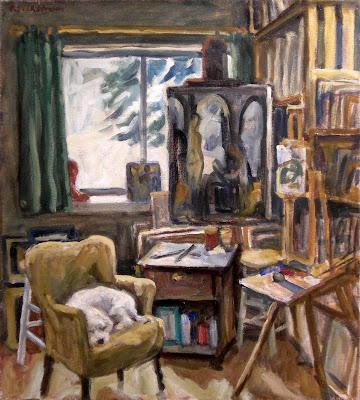 Sometimes you just don't want to go outside to paint in the snow. Sometimes, when you are a dog for example, you just want to curl up in a chair and hope that nobody makes you go out into the snow.

Bob, the bichon, has been a faithful model over the years. Though he does tend to shift now and then, once he's settled in he really holds the pose.  Also, the standard pay for a model is $12-20 an hr., but Bob is willing to sit for an occasional scratch behind the ear and dog biscuits. What a guy.

I just posted "Studio Dog" to my Etsy site, so you don't even have to come to the "snowshow" at studio 21 south to buy it!
Posted by thor wickstrom at 8:48 AM

thor wickstrom
Hello, I'm Thor Wickstrom. I spend most days painting, drawing, and doing illustration for picture books and magazines... Because I am interested in painting the real world around me, and the emotional world in my head, I work entirely from life and from imagination. I use traditional media; oil paints, watercolor, charcoal, pastels... My studio is in a historic mill factory in North Adams, Massachusetts. It's a sprawling studio with great light and space for working, teaching and exhibition... In the early 80s I studied painting at the Art Student's League of New York with Robert Philipp, and then in Paris at the Ecole des Beaux Arts and the School of Hard Knocks. To better understand the craft of painting, I copied master works- Rembrandt, Rubens, Titian- at the Metropolitan and Louvre museums for about 2 years (my personal graduate program)... I currently co-run an exhibition space, studio21south in North Adams, MA, (home of the conceptual mega museum, Mass MoCa, and near to the exquisite Clark Museum in Williamstown). Studio21south features the work of both representational and abstract artists... We're open friday nights and weekends, also by appointment.